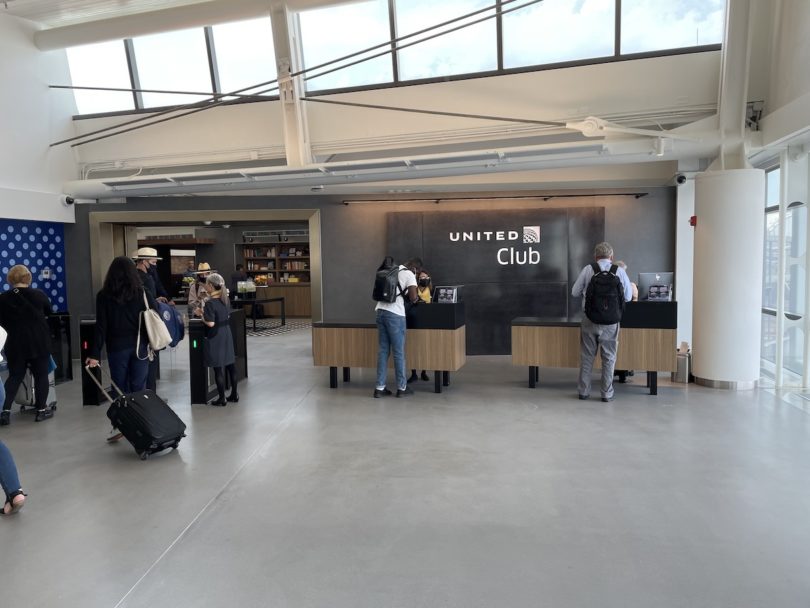 I visited the (huge!) brand new United Club in Newark this past week. There was a lot to like but it was also PACKED.

Last year, United Airlines opened their largest club to date and did so in Newark International Airport, Terminal C. This lounge was a long-time coming and many were looking forward to it, including me. I read Matthew’s review over at Live and Let’s Fly (open this in another tab and read it because it is great first look and covers many things I will not here) and was pretty excited because I would be there the day after it opened (the day before as well, so just missed it then!). Here are my thoughts.

First of all, let’s get some of the basic things out of the way. This new lounge is located near gate C123 and is open from 5:00AM – 10:00PM every day. The rules for accessing this are the same as other United Clubs, namely that you can enter with the following passes or memberships:

This is on an upper level so you need the elevator, stairs, or escalators to access the entrance. There were still balloons out from their grand opening.

Once you get upstairs, you have the staffed entry desk to the right and the electronic gates to the left. All you need to do is to scan your boarding pass to gain entry. However, the day I was there, many people were beeping red and had to go to the agents to be checked. Given that this was a brand new lounge, it could have been travelers that didn’t know about access rules or maybe they had one-day passes or maybe it was electronic glitches.

United says this is a 30,000 square foot lounge which makes it the largest United Club lounge and it has seating for 480 people. Remember these stats and keep reading. 🙂

Inside the New United Club Lounge 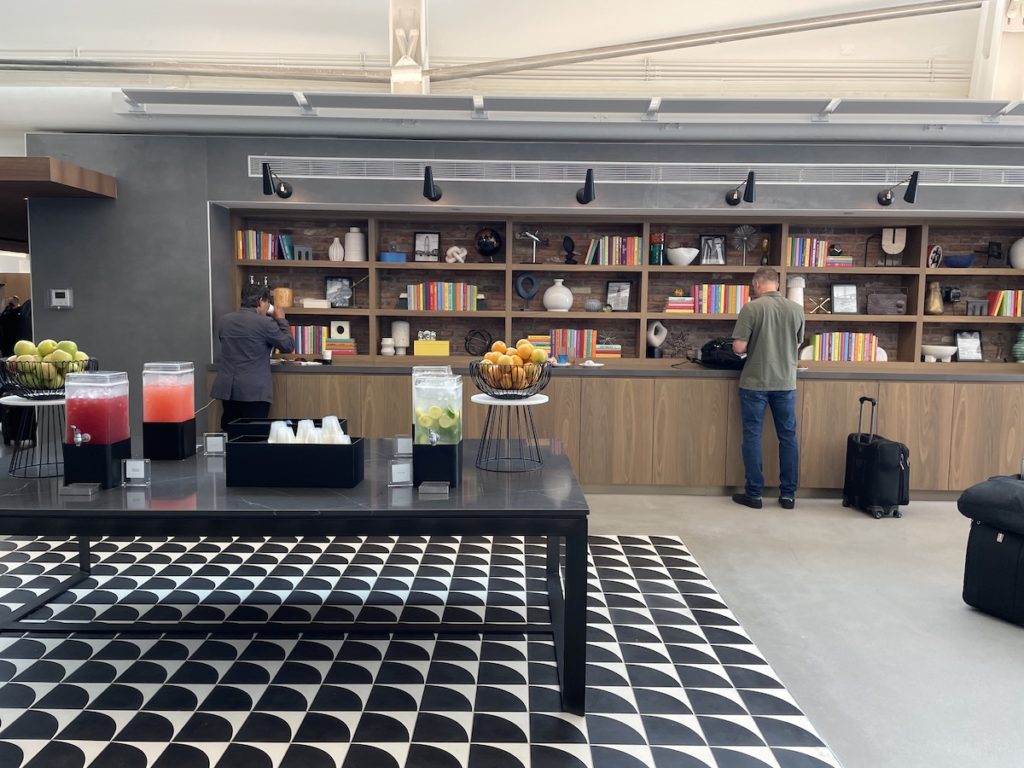 The entrance and library area – yes, you can read the books.

At this point, I once again encourage you to read Matthew’s review. He was there before it officially opened so he has photos that do a much better job at representing what the lounge actually looks like – without all the people! Yes, that is a foosball table and one of the only areas that was not with a lot of people!

There were so many people in the lounge that I only snapped some photos with my phone as I walked through. I wanted to grab out my mirrorless one to do it right but as it was, every time I went to take a picture, there were people right near me or facing me and I didn’t want to get in their space. So, please forgive the photos and the fact that some of them are a little angled – check out Matthew’s for better views!

Remember that this lounge is 30,000 square feet and the largest that United has. Well, I was there the day after it opened at around 2PM – 3PM and it was totally packed with people! I was walking around for a while to try and find one empty space to sit. Every food and drink area had lines of people waiting to access them.

So, I was not able to review it as much as I wanted since there were so few areas that I could try out or get to. Plus, I really wanted to get back to the Polaris Lounge for dinner. 🙂

But, speaking of food, this new United Club does food in a way that is so very different from all other domestic airline lounges. In fact, it is even a step up from lounges in the Lufthansa network throughout Germany. One of the food stations

They have an incredible offering of various sandwiches and snacks as well as things like a taco station. I grabbed a taco to try it out and it was really, really good! The staff was very good about cycling the meat out and bringing in fresh stuff as it got low (and it got low quickly due to the amount of people in the lounge).

My only gripe about the food is petty but I have to know – when you make a taco, do you put your shredded cheese on the tortilla first or after you put everything else on? I, and everyone else in line, put the cheese on last or close to last. Apparently, the person who designed this food station did so in the way they eat tacos, which is cheese first and then tortilla shells and everything else. 🙂 Yeah, a little strange and definitely kept messing up the line! They also have two machines for drinks where you can select your kind of drink and flavor. I always love these and glad they are using them here. For coffee, they have the regular automatic coffee drink machines but they also have a barista to make your favorite caffeinated drink for you. She did a great job and it was nice to see something like this in the US. Since I travel through Turkey a lot, I am used to things like this at the Turkish Airlines lounge in Istanbul so it was nice to have a similar experience in a US lounge. But, in case this bothers you, these drinks are served in single-use cups and not actual mugs/cups. Here are some more photos from the United Club. There are a variety of seating areas, including mostly enclosed workspaces as well as tables and eating areas as well. There are comfortable relaxing chairs and regular seating at long islands. United definitely did a good job of varying the 480 seating opportunities.

As for power, there are really power ports, USB ports (regular and type C) all over the lounge so it may not be too difficult, in normal times, to get access to charging if that is what you need. The flight board is right after you enter the main part of the lounge, on your right 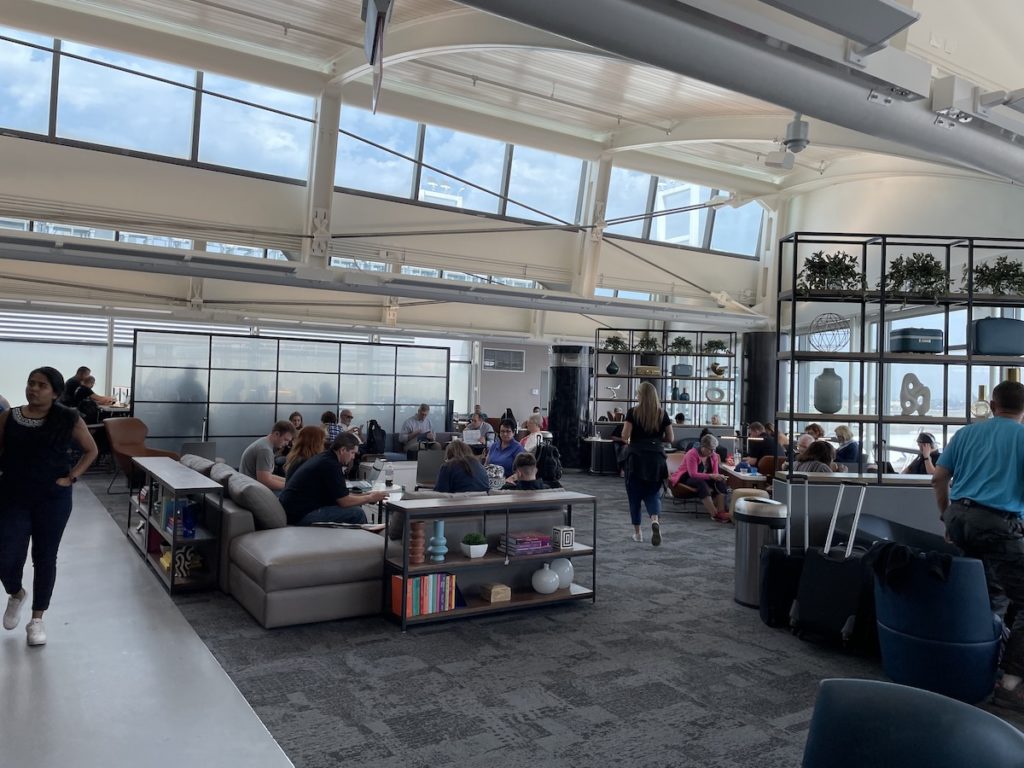 I did not take photos of the bathrooms (because they were packed, too) or the shower suites but this lounge does have very nice bathrooms and it is great to see the shower suites make an entrance here. This will undoubtedly be very popular with arriving passengers from international flights and even those that may be making early morning flights.

My Impressions of the New United Club in Newark

My very first impression was “wow, this place is packed” There is no question that this is likely one of, if not the, better airline lounges in the US for a domestic airline. But, I was unable to really enjoy it as much as I thought I would because the place was so packed with people. I was careful in my photos to try not to take pictures of people so they don’t even show how packed some areas really were.

I saw many people leaning against the walls eating because there was no seating for anyone. For sure, the design, layout, and food makes this an amazing lounge and one I will certainly hit up each time I’m in Newark and flying a Star Alliance carrier. But, the crowding is of concern.

I would imagine that if this continues, we may see United limit the use of single-use passes for this lounge. While the 480 seating number sounds big, remember that this lounge is in the proximity of flights carrying thousands of people and there are many that would have access to this lounge.

While walking around the lounge, it did not seem as if the majority of people were really talking about anything concerning the lounge so it was not like people made it a point of coming here just to see the new lounge.

So, I give high points for design, seating, power, and food. The overcrowding was just a bit much but hopefully United will get another pop-up lounge opened up in the meantime.