The 2017 Paris Air Show was a special one for many reasons, including the presence of the F-35 and the new Qatar Qsuites, and we got to enjoy it!

It has been a while since I have done a trip report, not because I have not done any trips but because most of my trips end up lasting only 24 – 48 hours and I spend more time on the planes than I do on the ground (and yes, I am backed up one airline reviews as well!)!

However, last year, I actually started to see how I could take my kids on more of my trips. Of course, they won’t go with me on marathon trips (for now!) but when I am not doing a quick turn or have a meeting, I have been taking them with me. It has been great for them and for me and it has been possible because of miles and points. The Paris Air Show is held at Paris’ Le Bourget Airport (outside of the city of Paris) every other year as the off years, the air show is hosted in the UK. I used to do marshalling and ground crew work at airshows in the US just out of my aviation love but it had been a few years since I was at an airshow. For this year, the space was open on my calendar and I decided to take our two older boys with me for the ride.

From Greece, there are a few options but, because it is summer, many of those options were not all that cheap. Sure, I could have used Aegean miles but it is a terrible value since you are still paying high fees on top of the miles (and you can use 45,000 Aegean miles to fly between the US and Europe in business class!).

It is only about a 3 hour flight and I finally found the cheap flights I was looking for – on Ryanair. I have flown Ryanair before (my first Ryanair flight was after finishing my first Etihad First Apartment flight – a bit of seat shock!) and knew what to expect in terms of what I would get (I would get to my destination) and what I would not get (pretty much anything else!).

The tickets for all 3 of us were a very low $220 total. I used a credit card that had travel credits left (I had both the US Bank Arrival and the Chase Sapphire Reserve that give you $300 in travel reimbursement per year) so essentially paid nothing out of pocket for the tickets.

The best part was the flights were non-stop from Thessaloniki to Paris’ Beauvais airport. So, tickets done! We left on a Thursday and were set to return on Saturday.

The hotels were the fun part! I have points across many hotel programs and Paris is loaded with a variety of chain hotels. Since I was traveling with my boys, I was going to try and find something more convenient but I also wanted to take advantage of some new properties to review. In the end, we compromised by booking our first night at the Park Hyatt Vendôme (a Hyatt category 7 hotel) and the Hyatt Regency Étoile for our second night.

When visiting hotels in Europe, you will find out very quickly that is easy to bump up against very low occupancy limits. In the case of the Park Hyatt, the occupancy for the “basic” room the certificate books into was 2. I simply put on my request page that we would like a rollaway bed. I received an e-mail from the Park Hyatt staff shortly after saying that the limit was 2 people in that room but they could move me up to the Park Deluxe Room for a 100€ supplement.

The Park Deluxe room was actually 100€ more per night over the Queen room so that was the same if I was paying for the base room.

For the nights we were at these hotels, here were the prices listed:

So, what did we pay? We paid only the supplement to move to the Park Deluxe room and used 2 free night certificates for a total of (in USD at the time) $111. Not bad for 2 nights in Paris at nice hotels!

Paris has a very nice metro system and I had originally planned to just use it to get around all the time. But, after calculating the cost, it turned out that taking Uber was cheaper for the 3 of us. I was actually surprised at how reasonable the Uber rates were, even at heaver traffic times.

With kids, Uber was definitely the way to go. It was very hot when we were there and being able to just jump in a car instead of doing the stairs and trains was easier and more comfortable all the way around.

When I visit airshows, I normally get there first thing and take my time browsing throughout all the displays. Even better is when I am working an airshow since then I can actually go into some of the planes and get closer to some of the big displays than visitors can. Plus, I always had access to the pilot/VIP tent for some serious (free) food! 🙂

But, I knew that going to this airshow with my boys would mean we would probably spend a few hours there (especially with the heat) and see the things that were really cool. That meant things like military vehicles and aircraft as well as some of the awesome static displays like helicopters and the Airbus A380. One of the things I did not count on seeing was the new Qatar Airways Qsuites business class cabin. I knew it was at the airshow that week but it was supposed to have left by Friday. It was at the far end of the airshow but we headed over there and stood in a line for a little while to be able to check it out. Thankfully, some air displays started while we were waiting and it helped the boys to pass the time waiting. 🙂 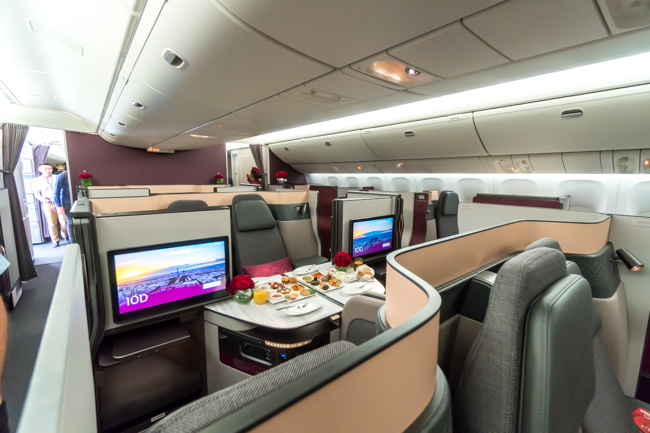 An up top view of the Qsuites cabin We also got to see the first public flight of the F-35 fighter jet. Of course, the boys really enjoyed that! We watched all of the aerial displays and checked out a lot of the static ones as well. Unfortunately, it was quite hot so we didn’t spend as much time wandering around as I thought we would. Still, the boys had a great time, albeit a tired one! We headed back into the city and switched hotels to the Hyatt Regency before heading back out of Paris the next morning. The boys thought the whole trip (which also included macaroons, baguettes, and more!) was a fantastic one, which made it a fantastic one for me as well!

Stay tuned for reviews on our hotel stays and information that will help you with your next Ryanair flight to Paris!