Garmin has been on an absolute roll this year with their rollout of new watches. Right after the new year, we saw the Garmin Venu 2 Plus, the Garmin Fenix 7 and the Garmin Epix 2. In March, Garmin introduced the new Instinct 2 watches as well as some specialized variants of the Fenix 7 and Epix 2.

Now we get their mainstream athlete watches that runners (and multi-sport athletes) have been using for a long time – the Garmin Forerunner series. 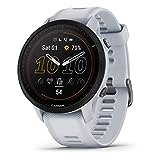 I encourage you to read the excellent reviews by DC Rainmaker(the Garmin Forerunner 955 review and the Garmin Forerunner 255 review),the very detailed and in-depth place for all reviews about GPS watches. He had these watches in hand and has hands-on reviews so it makes more sense to read what he has written than from someone who hasn’t even used one yet! 🙂

But, for some of the highlights, here you go. The Garmin Forerunner 955 now has the multi-band GPS support that allows for a much more accurate tracking of your activities. I use it on my Garmin Epix 2 and it is really, really good. It does hit the battery more than regular GPS but Garmin’s watches have gotten so good with battery life and efficiency that you still will likely only need to charge it once in a week (less, if you get the solar model).

In addition, the Garmin Forerunner 955 now has a touchscreen like the Fenix 7/Epix 2 watches. The buttons are still there so you can still go that route if you want but I can tell you that having a touchscreen on a Garmin is awesome. Plus, Garmin really thought it through so you can do things like shut off the touchscreen during activities (thank you!) and shut it off while sleeping (again, thank you!). The Forerunner 955 does not have an AMOLED option like the Epix 2 but I don’t think anyone really expected it to at this point.

In addition to a bunch of updates that the Fenix 7 has, there are some other new things that the Fenix 7 watches do not have yet and they mostly have to do with things like making the watch more focused on your body’s recovery and workout suggestions. That includes things like a Daily Training Readiness report, an Acute Training Load, a Morning Report, and others. These new metrics should be much more helpful to guide you in determining how well your training is going as well as your body’s other metrics like sleep, HRV (heart rate variability) and other bits and pieces.

Basically, Garmin has made it much more difficult for people that love the data and metrics to ever take off their watch – and put on, for instance, an Apple Watch for use as a more daily watch.

The Garmin Forerunner 955 comes in two variants and price points – the basic model (meaning no Solar) at $499 and the Solar model at $599. The only difference between the two is the addition of solar. This is cheaper than the regular price of the now-older Garmin Forerunner 945!

The Garmin Forerunner 255 is probably an even more serious upgrade since it now comes with multi-band GPS as well while keeping a sub-$400 price point! This watch is an awesome one to pick up for anyone that wants a top of the line running watch without paying over $500.

I’ll again encourage you to read the DC Rainmaker review but this watch looks like an awesome upgrade as well and I am sure that it is going to attract a lot of customers that may have left Garmin to go to Coros for their low-priced, high quality watches like the Pace 2.