There is a new kind of Apple Watch said to be coming – the Apple Watch Series 8 Pro. This COULD be the one to take on high-end Garmin watches in a new category.

Ever since the initial Apple Watch release, it is obvious that Apple wanted to disrupt the wearable market. And, they have! Smartwatches are extremely common place now and worn in pretty much every industry. The leader in the smartwatch market continues to be Apple but they have failed to reach into the high-end market that Garmin dominates for fitness enthusiasts. That could change with a rumored Apple Watch Series 8 Pro.

Garmin has fitness watches for almost any price point and category of fitness enthusiast you can imagine. From GPS watches at the $149 price point all the way up to watches that cost over $2,000, Garmin has every one covered.

As I have repeatedly said, it appeared that Apple had neglected the runner over the past few Apple Watch models. They had made a big deal about going for the runner early on but then left off features that would appeal to runners.

However, it is still more for people that want a very functional and interactive smartwatch – who also run/bike/swim. Garmin has continued to dominate the market (even with newcomer COROS making major advances) in two key areas: battery life and toughness/adventure features.

The Garmin Epix 2 has a great AMOLED display AND awesome battery life!

Battery life has continued to be the Achilles heel for the Apple Watch while Garmin is now outfitting their watches with some serious battery life. Some Apple fans may say, “yeah, but the Apple Watch has a battery-hungry display while Garmin watches do not!” My response would be my current Garmin – the Garmin Epix 2. This watch not only has an AMOLED display that is really bright and beautiful as well but it is even bigger than the Apple Watch. AND, it lasts me over 2 weeks between charges! 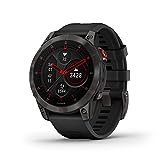 There are some Garmin’s without that display that go even longer – a month or even indefinitely! Apple just cannot offer that – yet.

The toughness/adventure field of customers is another area that Garmin rules. While an Apple Watch may be great for the office and some bumps, it is really not something that people want for adventure runs/hikes. The aluminum case may hold up ok for scratches but I bumped a previous Apple Watch against a wall and it dented super easily. No way am I wearing that for hikes or anything more serious!

Garmin has watches that are perfect for the ultimate outdoor adventurer. We are talking materials like titanium, stainless steel, and sapphire glass. Sure, the more expensive Apple Watch models offer similar materials but I have put my Garmin Fenix watches through some really tough situations and never had even a scratch while even the higher end Apple Watch models scratched for me or dented.

My Garmin Epix 2 is so tough that I have accidentally hit it hard against a concrete wall and scratched it against it while also falling and having it hit a rock on a hike – and it still looks brand new with no scratches or dents!

An Apple Watch Series 8 Pro Could be the Answer

But, according to rumors, Apple is prepping a new version of their Apple Watch for next month’s release – the Apple Watch Series 8 Pro. This watch, according to the latest rumors, will not have a new design over the regular watch (though earlier rumors pointed to it being of a slightly different design). But, it is rumored to be getting an extra 7% in size. This could allow for a larger battery – which could mean much better battery life (though the display would be larger so the additional battery life may not be that much).

Apple really needs to address the battery life issue, especially since they control software and hardware. They could easily make an “ultra” or “adventure” mode for such a new watch that would allow the user to get multi-day battery life out of it while shutting off the always on/reducing PulseOx to a more limited reading schedule/using more of a breadcrumb style approach to GPS/etc. This could help them quite a bit.

My Garmin Epix 2 lets me set standard and custom power settings. I can choose a variety of options to get whatever kind of battery life I need out of the watch – all the way up to 21 days in saver mode or, if I need the GPS, 14 days of GPS tracking! Let’s see Apple come close to that!

On the toughness, it appears that this new Pro model will have titanium for the case. This will likely bump off the special edition watches they have offered before as they look at targeting endurance athletes with this new Pro model. With more premium materials, this watch could come close to $1,000 – the same retail price as my Garmin Epix 2.

All of those improvements would be nice but having a single button really is tough for a lot of endurance athletes. People that are using their watches on the trails or in other adventures want the easy-to-access buttons. I have both touchscreen and 5 buttons on my Garmin Epix 2 so I have the best of both. Apple really needs to have a couple more buttons to allow for greater access to a variety of options. Or, possibly do like “hot corners” like on the Mac.

However, there is one thing that Apple could bring that would be a HUGE pull to many adventurers – satellite capability. Currently, the Apple Watch does offer models with cellular capability but for adventure or endurance athletes, it is common to be out of touch from cell towers so that doesn’t help. Garmin had offered some limited cellular capability but they have apparently left that behind.

It has been rumored for a while now that Apple is working on satellite capability in their iPhones for emergencies and such. IF they could bring such technology to their Apple Watch Series 8 Pro, that would be a huge help for those that are often off the grid but still want something for emergencies.

Garmin has an awesome little satellite device – like the tiny Garmin inReach Mini 2 – that lets users always have a form of communication when on the trails. It can even hook up to Garmin watches. But, it is an extra device at $399. If Apple could bring some kind of emergency option to the Pro using satellites, that would be quite a value-add for adventure athletes!

What Will the Apple Watch Series 8 Pro Be Like?

We have just about a month before we find out about these rumors and if they are true! If such a watch debuts, it is definitely a sign that they want that adventure category of customers, customers that currently use Garmin or COROS watches.

I am excited to see what they may do with such a watch over subsequent models. For example, if they are trying to get those customers currently using Garmin Fenix watches or COROS Vertix watches, those users are ok with heavier, larger watches. Apple could make a larger watch version for those adventurers and really put more features in. We will see!

Would you buy a beefed-up, better battery enabled Apple Watch Series 8 Pro? What price point would you be interested in such a watch?