The newest action camera is here – introducing the new Insta360 X3 camera! This is a 360 action camera with serious features – check them out!

The fall season is upon us which means that you can expect tech releases to start coming pretty heavy. GoPro will unveil their new GoPro HERO camera soon, DJI will release their new action camera next week – but, Insta360 has beat them both, and probably not just in timing. Introducing, the new Insta360 X3! 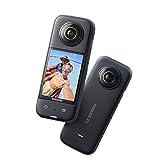 The new Insta360 X3 is the 3rd iteration of their popular One X models. But, Insta360 decided to drop the “One” from the name so now it is simply the “X3”. But, it is the newest version of those and replaces the One X2. The Insta360 X3 is a 360 action camera that can handle a lot of action! Plus, they have turned it into a single-lens action camera as well that could very easily beat GoPro and DJI in most categories. So, let’s jump into the details!

Many people may think that 360 cameras are something that never really came into full acceptance on a consumer production level. But, they would be wrong! The reason they are wrong is that a 360 camera enables a fantastic feature that Insta360 puts to great use and that is “reframing” options.

360 Degrees = Tons of Options for Views Editing with the AI software makes it a breeze to cut the content to exactly what you want – from 360 degrees to social media! | Courtesy of Insta360

This means that you just push RECORD and capture everything going on around you in 360 degrees. This means you don’t miss any of the action, even stuff you don’t see at the time! Then, when you are done, you can use either the smartphone apps that Insta360 has or their desktop apps to “reframe” – that is to frame the video with your final options (like for Instagram, YouTube, TikTok, etc) and move the footage around to get exactly what you want.

You can put “keyframes” in place so you can actually make it look like a multi-camera production – all just from grabbing the different framing options from your 360 degree footage! When you are done, you can output a video that has the best action, even if you didn’t see it happen in real-time. But, even 360 degrees still has tremendous applications. If you are viewing 360 content on YouTube, you can pan around and see what is going on. This gives a very immersive feel, even if you are not wearing special glasses. This is great for adventure or travel since it lets you just walk/run/bike through your route and then you or others can scan around and get all the area after the fact. And, Insta360 has a great feature with the “invisible selfie stick.” This means that you can attach a selfie stick to the bottom and the Insta360 framing will cut it right out – so you can capture footage of yourself from even up to 3 meters away and you cannot see the stick (except in the shadow of the stick – nothing you can do about that!).

With the X3, you now have a new “Me Mode” where you can shoot selfie video at 60 frames per second and not even need to reframe – the stick is gone!

The new Insta360 X3 comes with increased size sensors, 1/2″ 48megapixel sensors, on both sides so this gives even better low light and detail capturing than the previous X models.

While using the dual 1/2″ sensors for action 360 footage is great, Insta360 also has a “Single-Lens Mode.” This allows you to capture just one point of view in 4k resolution. This is great for when you want to mount the X3 in a chest-mount solution or anything else where you only want to capture the action in front of the camera. If you scale it down to 2.7K resolution, you can capture in a wide 170 degree “MaxView” option for even more footage in view. In addition, the still photo side will capture 72mp photos as well as 8K 360 timelapses.

An action camera is not complete without it having some kind of stabilization and Insta360 has done a great job in this department. With a six-axis gyroscope and their own “FlowState” stabilization, you can lock some rock solid footage whenever you are on the run or doing anything that would make the footage normally bounce all over. In addition, it also has 360 degree Horizon Lock so that you can always keep the horizon level – another great feature when you want to keep things level.

There is also a new “Loop Recording” mode so you can slap the X3 on your dashboard. It will continuously record but just save the last few minutes (according to your choice of the interval) so you can save space on your memory card but also capture that footage that you may really need.

The New Insta360 X3 vs Everyone

Like I said, GoPro has yet to announce their latest HERO action camera and DJI is announcing their latest next week. So, how does this stack up against what they have now and what they may release soon?

First of all, neither camera is a 360 degree action camera. GoPro has tried and not been able to really compete in this space and DJI has not entered it at all. So, if you want to capture all the action in 360 degrees, Insta360 X3 is your only choice among the three.

But, when it comes to single lens mode, how will the X3 stack up against the competition? With a 1/2″ sensor, this beats out every action camera right now. They use smaller sensors which do not let in as much light (something that makes cameras like the GoPro horrible for night use) and they do not capture as much detail. The X3 with its 1/2″ sensor is definitely in a category of its own.

I do not think we will see a 1/2″ sensor coming from DJI next week. It looks like they are going back to the more standard shape as opposed to their Action 2 and this is probably for one big reason – heat. I have the Action 2 and without the protective case, you cannot hold it for more than a few minutes because it gets SO HOT. The GoPro HERO 10 also had problems with overheating. So, I doubt they will go larger on the sensor on the inside which could make heat dissipation even more difficult.

Thanks to the awesome X3 form factor, it works better for heat than normal action cameras.

Now, how about frame rates? When capturing action, frame rates like 60 frames per second and even 120fps or 240fps are where it is at. It makes for smoother footage and works great. The Insta360 X3 goes up to 4K 30fps in Single-Lens Mode and you need to drop to 3.6K to get 60fps and there is no 120fps.

This means that both GoPro and DJI have better frame rate options with 120fps standard and even 60fps at high resolutions (while even offering 240fps). So, if you need that 120fps, you will want to go with DJI or GoPro. But, I think the tradeoff on that is huge with being able to get better low light capture as well as things like 360 degree content!

Waterproofing? Yes, the Insta360 X3 has it, up to 10meters by itself and more with lens guards. Also, the Insta360 has a 2.29″ touchscreen for viewing and setting adjustments. This is awesome and something that both GoPro and DJI have struggles with due to their form factor.

Battery Life? The Insta360 X3 has a 1800mAh battery but I will have to wait to see how that works in real life scenarios. Yes, the naming patterns can be a bit difficult. 🙂 But, the Insta360 One RS is their modular interface that allows you to put different lenses on a single core. I currently have the Insta360 One RS 1″ model and am testing it out and really do like it.

But, it is not necessarily for action like the X3 series is. First of all, it is resistant to some water but is not waterproof so you are not going to take the 1″ out in the water. Also, the X3 has a more durable exterior than the 1″.

So, who should get the Insta360 X3? I think the 1″ is the ideal camera for the traveler, vlogger, content creator or anyone that films in lower light. Thanks to a sensor with twice the size, the 1″ is going to be better in those ways. Plus, it films with 6K instead of 5.7K, which is a bit more, especially when stretched across 360 degrees.

But, it does cost quite a bit more! I think the X3 is the perfect blend of what the RS modular system offers all in one package and I would recommend the X3 for anyone wanting an action camera or a take-anywhere-camera. I will be getting the X3 soon for testing and review and I think I may end up using the X3 more than the RS 1″. We will see!